Welcome to our Business Bulletin

Welcome to the Winter 2020 edition of Hobson & Porter’s Business Bulletin. 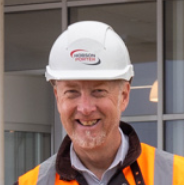 I needed a job! I had no real plan after school and almost got into it accidently, I was a trainee QS at George Houlton’s. My first site was the YEB Building on Clough Road (now NPower) in 1984.

One of my previous employers (Quibells) built the original leisure centre in 1995/96, so early in my career I had an affinity with the centre and was keen for us to be involved in the extension project.

Challenging. Obviously, we’re having to adapt and change regularly to comply with the different rules. Unfortunately, in the early days we had to close nearly all of our sites, but since then we’ve reopened and adapted well.
As an industry we’re very fortunate to have been affected less than some other industries. We have to continue to adapt and prepare for what could happen in future.

What do you think clients value most about working with Hobson & Porter?

We’re a trusted, reputable company and have built our reputation over the last 50 years, through the way we treat our clients, suppliers and sub-contractors.

I worked in Penrith and built the original Oasis (now Centre Parcs) lodges with Quibells. I lived away from home for 18 months during that project so it was a good experience because it was different.

QS Department. No one will argue with that!

Always look where you're walking.

Favourite memories from working at HP?

Everyday, obviously! I think my favourite project was probably Haltemprice Leisure Centre redevelopment in 2013/14, I enjoyed being involved in that.

Bohemian Rhapsody. It was good, but as a big Queen fan I picked it to pieces on the music! 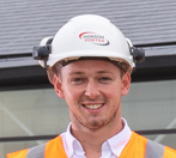 My dad was a housebuilder, so I had an early interest in the industry from school. I did A Levels and then started doing joinery at college, went on to do a HNC/HND course and applied for a job at HP. They had a job local to me (East Riding Leisure Hornsea) and so I started from there.

I’m local to the area so this is my leisure centre, I was born in 1996 and it was being built the day I was born. It was really good as I had the best knowledge of the building before we started work there, so I knew where all the different areas were during the project. All my family live in the area so it’s a source of local pride, I can tell my grandchildren: "I helped to build this."

We put a one-way procedure in place with single doors and exits to stop people crossing each other, hand sanitiser stations placed around site and maintain the 2m social distancing rule. Once you get into a rhythm you get used to the new procedures.
We did half the workforce on site purely for staff welfare. We’re still learning and adapting to the new conditions and taking precautions wherever needed.

What do you think clients value most about working with Hobson & Porter?

This is my first project, but even so the scale of the building has been great to be involved in. The views from upstairs are fantastic.

Don’t look on your phone when you’re moving around site.

Black coffee in morning, then a splash of milk in the afternoon.

Bridge of Spies with Tom Hanks. 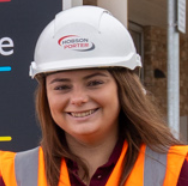 Similar for me, I kind of fell into it, I started a job as a receptionist for a small pod manufacturer after university, then moved into estimating and decided it wasn’t for me, so moved into surveying. My first role was at Hinckley Point in Somerset working on temporary office accommodation.

East Riding Leisure Hornsea is my first job for Hobson & Porter so it’s been a really interesting one. It’s had a lot of variations during the scheme and has been challenging at times but it’s been really good to work on.

We had a few weeks working from home and gradually returned to the office. It was a bit strange to get used to at first, but we adapted.

Lincoln Cathedral was a great project to work on. I got to go inside and onto the roof which was cool.

JoJo Rabbit, which is about children growing up in Nazi Germany.